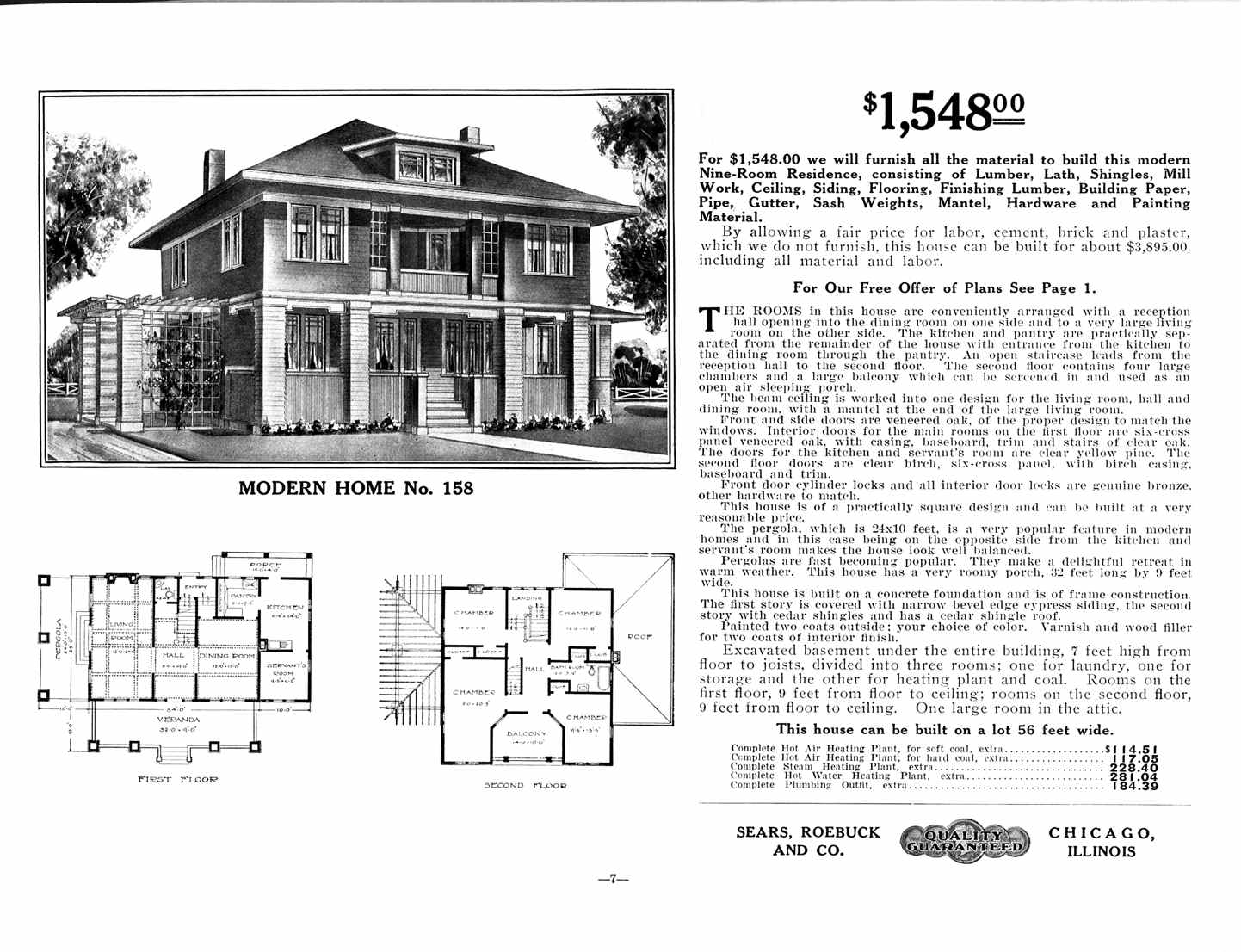 Way back before we had modern shipping container homes for sale on Amazon.com, there was Sears Modern Homes. That’s right—as far back as 1908, you could mail-order a kit to build your own home through Sears, Roebuck and Company.

How Did Sears Get Into The Mail Order Homes Business?

In the early days, Sears wasn’t doing too great when it came to selling construction materials. This created two problems. The first was a deficit in the company’s bottom line where it needed to see a profit. The other was a lot of building supplies hogging space in Sears warehouses.

A manager named Frank W. Kushel found a way to kill two birds with one stone when he took over the department in 1906.

Instead of trying to sell one material or tool at a time, Kushel came up with the idea of bundling together the surplus supplies into building kits.

Another seller called the Aladdin Company actually beat Sears to becoming the first company to offer a prefab home kit via mail order, also in 1906.

It would take two years before Sears was ready to start offering building kits through the mail, but when the company made its foray into the building kit game, it did so in a big way.

In 1908, Sears shipped out Book of Modern Homes and Building Plans. Contained in this catalog were 44 different types of home kits, all of which were available by mail order.

The least expensive model was priced at $360. According to this inflation calculator, that would be approximately $10,373.40 in 2019 dollars.

Sears was quickly able to leap to the forefront of the home building kit niche. The company had a massive inventory of supplies to sell, a large selection of plans, and a massive reach with its catalog.

Soon, what had begun as a struggling department became a success. Sears was able to quickly sell its surplus inventory, and found itself needing to boost production in order to keep up with demand.

How Did Sears Keep Prices Low?

You will have noticed that the costs for Sears kit homes even back in 1908 were quite affordable.

The way that the company was able to keep costs so reasonable for its mail order craftsman home plans was through developing efficient mass production techniques.

With manufacturing costs low, Sears was able to pull in a profit while also keeping costs low for homebuilders.

Sears Homes Were Easy to Build

Although saving costs is one of the reasons why many people turn to home building kits today, it is not the only one, and it wasn’t in 1908 either.

Home building kits also are appealing because they can be fast, affordable and easy to put together even with limited personnel, equipment and experience.

Here are a couple of the ways in which Sears was able to make its home kits easy to assemble:

Rail cars and trucks transported the 25-ton kits (on average—the exact weight varied from one model to the next) to the buyer, who would then find himself with around 30,000 parts to assemble.

Sears House Kits Were a Revolution

After taking off during the early part of the 20th century, Sears homes remained a big seller over the decades to follow.

While the original Book of Modern Homes and Building Plans included 44 different styles, by 1940, the company had come up with 400 types of mail-order homes.

No one seems to know the exact number of homes Sears sold during that time period, but estimates place it anywhere between 70,000 and 75,000.

Because these homes were well-built out of sturdy materials, some of them still stand today.

You are most likely to find a Sears kit home if you live in the Midwest or Northeast regions.

In particular, you are in luck if you are located within driving distance of Elgin, IL—a town put on the map by the Elgin National Watch Company which was first incorporated in 1864 and operated through 1968.

This is an interesting intersection of events, actually, as the Elgin National Watch Company and Sears had something in common.

Both built their reputations and grew their customer bases by leveraging mass production without compromising on quality.

So, it seems appropriate that Elgin became the most popular location for Sears home kits. Hundreds were constructed there.

You might think that Sears home kits simply paved the way for modern prefab home kits, but that would be a great underestimation of their broader impact.

Again, consider that materials like asphalt tiles and drywall were not in widespread use prior to the Sears Modern Homes program.

Also, not a lot of homes had, for example, central heat before Sears started up with this program.

So, through its catalog and the 70,000+ homes the company shipped, Sears helped to bring modern building materials, techniques and living conveniences to people across the country.

So, no matter when your own home was built or by what company, in some way, the Sears Modern Homes program probably has had an impact on your life.

Now that we have introduced Sears Modern Homes and you have learned about their place in history, you probably want to take a look at some of these homes!

Here are some examples from the Sears Archives.

During the early days of Sears homes, many of the houses simply had model numbers instead of names. As an example, here is Model No. 113. This home was from the 1908 through 1914 time period. The price in US dollars at that time was $1,062.

The house featured eight rooms in total, with large front and side porches and a gambrel roof. It had a kind of “farmhouse” appeal to it, and measured 27 feet and 6 inches wide by 40 feet long.

A smaller, low-budget home in the 1915 through 1920 era which you could mail order from Sears was the Natoma.

So, even by modern-day standards, the Natoma was a very cheap house.

Even Sears showed awareness of this fact, writing in the catalog, “No doubt you will be surprised at the idea of getting the material for a house of this kind for such a low price. The picture of the house, however, cannot be expected to show anything with the quality of the material which we furnish … we aim to provide material that will be even better than is considered necessary by a good many people.”

For another example, this time of a larger, more expensive Sears home, let’s jump to the 1927 through 1932 era and take a look at the San Jose Model.

The design of the house was inspired by Spanish missions with stucco siding and a shingled roof. Included were a vestibule, living room, dining room, kitchen, basement, bathroom and bedrooms.

Now let’s move forward into the 1933-1940 era to take a look at the Gateshead, a cut-and-fitted “Americanized English type” house. Describing it, the Sears catalog writes that it was “particularly adaptable to narrow city blocks. The exterior is of clear bevel siding with half timber and stucco on the front gable. The main roof sweeps gracefully over the front vestibule and the front gable roof is treated in the same way, extending over the side porch.”

Consisting of two stories, the house included two large bedrooms and a bathroom together with four closets on the second floor. On the ground floor, there was a living room, dining room, kitchen, vestibule and porch.

Perhaps the most amusing aspect of this ad is the graphic in the lower right with the caption, “When is your own home, mowing the lawn is a pleasure instead of work.”

In fact, just by reading through a selection of these catalog pages for Sears Modern Homes, you can learn a lot not just about the building styles and techniques of the time, but also about the culture and how it evolved over those decades and was expressed through homeownership and the desire for it.

Indeed, the advertisement for the Gateshead makes a particularly strong push for it—just read the first paragraph in its entirety and you’ll see.

We take drywall, asphalt tiles, HVAC and other materials and conveniences for granted nowadays.

But in the early days of Modern Homes, a lot of customers had never experienced these features.

Modern Homes revolutionized the way homes are built, and the legacy of the program is one which, like those techniques, materials and conveniences, will continue to endure.